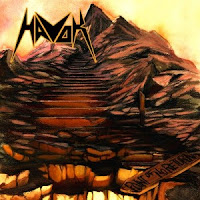 Jesse De Los Santos' bass is boiling. It's churning. And it drives the title track and intro to Havok's ultra-brief EP, Point of No Return. David Sanchez's vocals, particularly at the chorus, are desperate and ragged in all the best possible ways and this is thrash that sounds immediate and passionate. Great riffing, a shining solo from Reece Scruggs - what's not to like? It sounds a lot like Time is Up, after all. Enter then, "From the Cradle to the Grave," propelled by Pete Webber and literally studded with riffs. Good stuff. Almost as good as... Time is Up. This would feel like a leftover repository if it weren't for...

Point of No Return succeeds most in that it compels one to pull Sepultura's Arise back off the shelf along with Slayer's Reign in Blood (and shame on whoever, if anyone, let that one sit on the shelf at all). The straightforward interpretations of "Arise" and "Postmortem"/"Raining Blood" are more than competent. They're admirable. And entirely unnecessary. Havok's acknowledgement of their influences comes through clearly in their sound, rendering covers redundant. Even the artwork leaves me cold here. If I got this free at a show, I'd be stoked. For eight bucks through the mail, though, Point of No Return may provide the most compelling argument in a long time for abandoning the physical format and cherry-picking individual digital tracks.
Posted by Gogmagog at 5:39 AM No comments: Links to this post 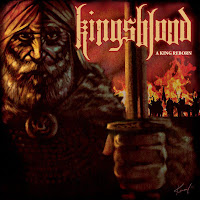 I'm been clamoring for a piece of recorded music from Kingsblood ever since seeing them live for the first time in October of 2011. A King Reborn, the debut EP from the revamped lineup (that also debuted live for the first time at that October show), was released last week and not only captures the bulk of Kingsblood's current live set in the studio but whets the appetite for what this fan hopes will be a long and fruitful career for these blackened merchants of Nordic death. 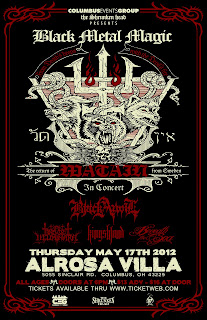 Thursday night found me back at the Alrosa Villa for the third time in a year, primarily drawn this time for the Kingsblood EP release of A King Reborn. It was a five-band bill and also included Beneath the Sea, another local group I enjoyed at the Metal Massacre show in January of this year. A sunny evening - and Rock on the Range looming over the weekend - must have kept the crowds at bay as attendance, especially early on at the 7:00 showtime, was sparse. Merchandise was a little underwhelming with a handful of shirts available from the two top-billed acts but, frankly, with fewer disposable dollars than usual, I was satisfied to walk away with a nice Watain tee and a couple copies of the Kingsblood EP (you always gotta buy an extra and spread that gospel).

Read more »
Posted by Gogmagog at 6:39 PM 7 comments: Links to this post 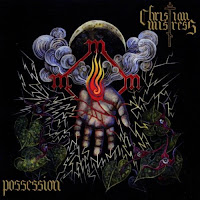 Radio still works. Much like my recent, long overdue introduction to Overkill, a spin of "Pentagram and Crucifix" coming across the car stereo during a morning commute led me directly to the purchase of Christian Mistress' Relapse Records debut long-player, Possession (as well as a simultaneous purchase of their 2010 LP on 20 Buck Spin, Agony & Opium). It's yet another classic metal platter, this time with a doomy vibe not unlike my beloved Lucifer's Friend or even Budgie. A dual-guitar five-piece band fronted by a female vocalist, Christian Mistress are more than competent and just original enough to stand out from other genre revivalists and Possession proves to be a rewarding, entertaining listen that seems to have some staying power potential.

Read more »
Posted by Gogmagog at 9:05 AM No comments: Links to this post

We're Through. Breaking Up with Bands.

For almost as long as I've been buying records, I've been collecting my favorite bands in a completist fashion. There are plenty of fantastic solitary entries on my shelves but, more or less, if a single act has more than one record I love, I'll eventually get it all, the good, the bad and the ugly. I'm just that interested in the entire story of a band I enjoy. And I generally weather through low points and lulls patiently, either waiting for future work to move me like the albums that drew me in to begin with. Even I have my limits, though, and, cleaning off my shelves this weekend, came across a few who no longer rate an automatic purchase of their latest product and have an overdue "Dear John" letter coming their way.

Dear Def Leppard: I've had it. The spark has never quite been the same since 1981. I know we had a few more good times through the 90's but it's apparent I'm not your type anymore. First I thought you cared more about older women than me, then maybe just country girls but now it's become apparent that you only care for older, country women who shop at Wal-Mart. I don't know how you'll skew your next effort toward the Hoveround-driving, NASCAR-loving, Forever Lazy-wearing crowd but I'm sure you'll find a way - especially if Taylor Swift is involved. We're finished.

Lars, Kirk, James and someone else: We need to talk. I don't know if our relationship is beyond repair but it feels like we'll never get back on the right path. I tried to be patient and indulge you. I'll admit I even had fun experimenting but it just got too excessive. It's hard to put the genie back in the bottle and it's obvious that therapy isn't the solution for us. I appreciate that you tried to start over but it just feels like your heart isn't in it. Plus, I know you've been cheating. Don't deny it. Everyone's been laughing behind your back about that old cougar you've been seen with. I don't know if you're the table but sure as hell hope you can find the door.

Jerry: We both know this is long overdue. I really appreciate how you tried to spice things up by bringing someone new into the relationship and, for a while, it was OK again. Then they got sick of it, too. After your latest indiscretion I think it's safe to say, "It's not us, it's you."

Dave: I won't lie, you still deliver in the headphone department. You just say a hell of a lot of stupid shit. Ted: same goes for you. You're both on notice.

Posted by Gogmagog at 4:12 PM No comments: Links to this post

Go here for the latest from Danzig, a cover of "Devil's Angels," from the soundtrack originally recorded by Davie Allan & the Arrows (check out the original instrumental here and some great insight on the whole soundtrack from Julian Cope's Head Heritage here).

From http://www.danzig-verotik.com/danzig/news.html on May 5, 2012:
DANZIG COVERS CD & SONG PREMIERE & STREAM

"I've wanted to record this song since 1979 & this is exactly the Same arrangement I had for it back then, so it pretty much sounds like that late 70's style of mine. I'm really happy with the way it turned out, it actually came out much better than I had hoped it would. We're going to be playing it live on these Upcoming Shows."

DANZIG is currently in the Studio Finishing up & Mixing his as of yet Untitled Covers Record set for Release Late Summer/Early Fall of 2012. We will be streaming 'Devils Angels' here on the site shortly & in the weeks to come will be posting a Track Listing for all the Songs
Posted by Gogmagog at 8:38 PM No comments: Links to this post 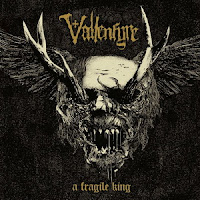 Where In Solitude's The World. The Flesh. The Devil. was essentially tribute rendered tepid, Swedish-style death-lovin' supergroup Vallenfyre's A Fragile King is a rousing success. A less-than-stellar line of middling recent releases had me doubting my one-time admiration for Century Media. Then along comes this allegiance of Paradise Lost (Gregor Mackintosh, vocals; Adrian Erlandsson, drums), Doom (Scoot, bass) and My Dying Bridge (Hamish Glencross, guitar), admittedly all bands I know more by name than by sound, and I'm impressed anew. Instantly recalling early Entombed (and maintaining that tone throughout), A Fragile King nonetheless forges a distinct identity from the outset and stands firmly on its own, launching one excellent song after another into the fearsome fray immediately conjured by the opening notes of "All Will Suffer." They will, indeed.

Read more »
Posted by Gogmagog at 9:29 AM No comments: Links to this post 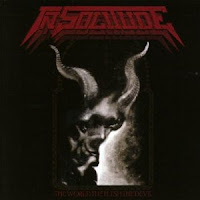 I'm just about a year behind in my acquisition of In Solitude's The World. The Flesh. The Devil. And, about a year ago, I was a few months behind enjoying Ghost's Opus Eponymous. It's just as well, I suppose. Like the Ghost record, In Solitude's second full-length is full-on throwback and, side-by-side, it would have easily been lost in Opus Eponymous' long shadow. While The World. The Flesh. The Devil. is certainly less original and inspiring than Ghost's debut, it's still fun, drenched in NWOBHM sounds and bringing the that classic Nordic aesthetic that demands a Mercyful Fate comparison, but it never quite attains a-hell-of-a-lot-of-fun-ness. In fact, even a year removed, it's easily absorbed not only by the accomplishments of Ghost, but by its own influences as well.

Read more »
Posted by Gogmagog at 9:42 AM No comments: Links to this post

Metal in the Mail: In Solitude, Christian Mistress, 3, Vallenfyre & More

Today's mail delivery brought a massive amount of music to my doorstep, finally fulfilling some items that have lingered for too long on my wishlist. From the three cartons heaved toward my door by the USPS, the following metal emerged: Christian Mistress' Possession and Agony and Opium, Abigail Williams' Becoming, Vallenfyre's A Fragile King, In Solitude's The World, The Flesh, The Devil, 3's The Ghost You Gave to Me, Woods of Ypres' Woods 4: The Green Album and the Love & Rockets tribute, New Tales to Tell (not necessarily metal but with the likes of Black Francis, Maynard Keenan/Puscifer, Davey Havok, Monster Magnet and more, it defies categorization).

A few of these I've heard enough of to know they were needs versus wants and a few (In Solitude, 3, Abigail Williams) are straight-up blind purchases. Looking forward to wrapping this week up with a lot of listening as well as plenty of review fodder for the next few days.

Posted by Gogmagog at 7:30 PM No comments: Links to this post