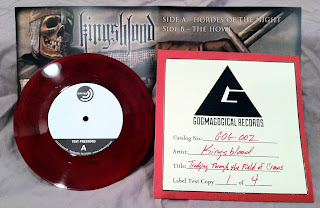 Once one begins to navigate the world of small labels and limited runs of collectible vinyl, it doesn't take long to run into test pressings. Once just the stuff of collector lore (think the fabled '78 Misfits acetates of "Static Age"/"Teenagers from Mars" that purportedly never made it past five or six copies that went to Glenn, Jerry and jukeboxes in Max's Kansas City and CBGB's with those last two always reportedly popping up in used record stores for a buck, forever taunting treasure-hunting collectors), nowadays test pressings are not at all uncommon on electronic storefronts, nearly always priced at a premium well above the mass-produced counterparts. 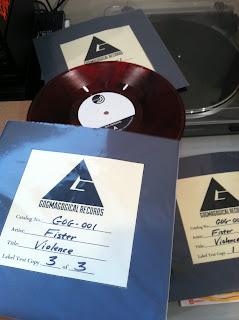 It's not exactly a secret but may surprise some record-buyers that, while every vinyl pressing results in a handful of true test pressings to assess the record prior to production (usually around a half-dozen), some plants will produce many more (up to fifty at United Record Pressing) at a relatively low cost. These are nice to share with friends of the bands and label but concern me a bit as one who collects, too, as anyone even a little unscrupulous can post what appears to be a real rarity for sale when, in fact, it ain't that special. 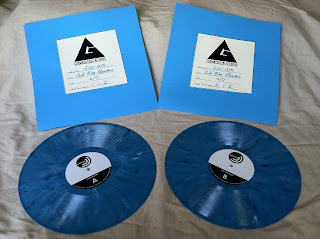 That said, I am about to part with a few test pressings of my own label, Gogmagogical Records. Each record we have pressed had five tests delivered by the plant. Fister got three of theirs, one went to Encapsulated Records (who made the jackets) and I got the fifth. Cold Blue Mountain and Kingsblood each have five members and the bands each got all five original tests. I ordered four extras only with the Kingsblood 7" as we had just partnered with The Black Birch to promote the EP and hoped to use some for contests. As I began working with Bariann and her team I also received my pressing plates and excess labels from the plant for the Fister and Cold Blue Mountain records and, to my surprise, each package contained two additional tests. While I am not exactly sure what I will do with each of these in the future I can pretty much guarantee you will not see them for sale on the site marked up to snag extra dollars. It doesn't feel fair to the bands and it doesn't feel fair to the fans. My guess is that we'll eventually use them for promotional contests or as parts of prize packages associated with charitable events. 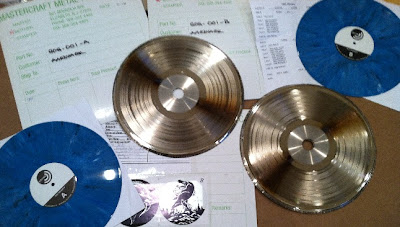 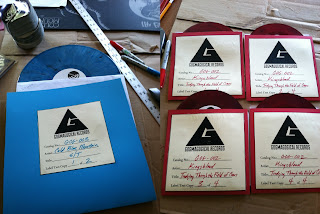 So, I have included a few photos throughout just to share a little more of our DIY ethic here. While we have some fantastic creative partners here, there really wasn't anyone I could ask to create jackets in such small quantities across three sizes. As these tests come in plain white sleeves I wanted to gussy them up so took a trip to Hobby Lobby and bought some heavy, heavy paper, printed up a standard label template and cut, folded and assembled these by hand. I tried to coordinate the colors with at least one aspect of the vinyl and attempted to carry that over even into the Sharpie used to hand-label. While the Fister and Kingsblood tests are very close to an actual color produced, the Cold Blue Mountain is entirely unique as it appears the plant took the split colors and instead combined them in a blend. In each case, though, these are all that exist aside from what the bands hold. I suspect there may be two more Kingsblood tests coming back with their plates eventually but am not certain. 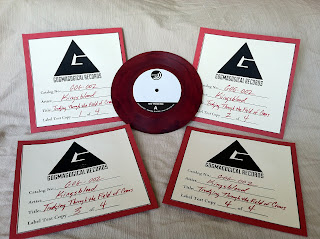 Keep an eye on the label site for any opportunities to grab any of these. Likewise, if you have a brainstorm or a worthy cause to which we may want to use one or more, get in touch. Just because I want these to be free to collectors doesn't mean I want them to be any less special.
Posted by Gogmagog at 10:13 AM No comments: Links to this post

Transparent Vinyl: The End of Violence, Mountain for a Molehill, Vinyl Vikings and Coupon Codes.

So, as I like to update every now and then,here's a look at current numbers and the general Gogmagogical Records state of the union, release by release:

Violence spoiled me. It's a beast and it has moved quickly. In fact, quantities are dwindling to the "oh, shit, I better get one now" level. I just saw these guys at the last two dates on their summer tour and they deliver the goods live. Fans were drooling over all their vinyl and I restocked their Violence stores with a good portion of my remaining stock.

Here are the facts: 1) these will sell out; 2) any potential re-press possibility is unknown; 3) we will not re-press with multiple jacket variations. Quantities available as of this exact moment are:
I: Artwork by Coby Ellison.  Lavender base with black and white mixed vinyl: 17 remain.

Get one now. If you want a set of five, move even faster. 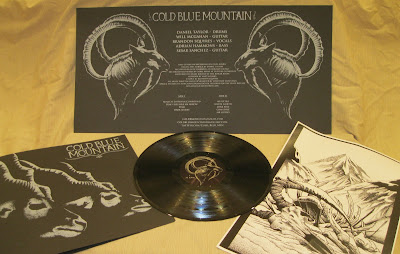 Here's a good chance to be that first guy in that chain. Through the end of July use code COLDBLUEMTN and get the record for only eight bucks. That is a huge loss per record for me but I have faith that a little word of mouth is all that's needed.


Kingsblood - Trudging Through the Field of Crows (GOG002)

This little EP is picking up rave reviews. Sales have been brisk though definitely focused in the band's home base of Columbus, Ohio. Watch for more press and a few promotions soon. This is a mean, massive sound in a seven-inch package and three-packs are flying. Like Fister, even with a re-press we won't repeat ourselves, and once these introductory colors are gone, they're gone. 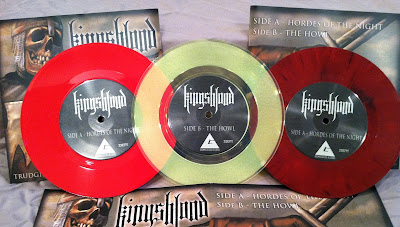 Finally, there are lots of coupon codes still hanging out there on the site. While the Cold Blue Mountain code will only last two weeks, these others never expire. Mix and match 'em and take me to the cleaners:

Posted by Gogmagog at 9:15 PM No comments: Links to this post

Stuck recently on my excessive SST collection, particularly the works of Black Flag, and celebrating the addition of the Circle Jerks' long out-of-print VI CD to my library to replace my original cassette after years of scouring secondhand bins, it was only a natural progression to focus this week on Keith Morris' Off!. 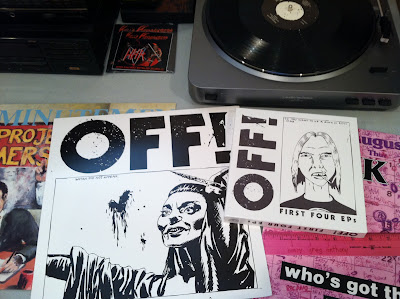 I don't know the story behind the band's formation but guess it's more than a coincidence that, like another band on Morris' resume, they share a name with an insect repellent. Add in artwork by the incomparable Raymond Pettibon and Off! is absolutely irresistible. 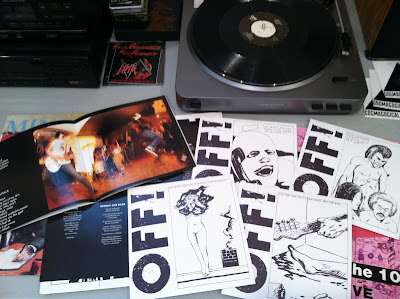 The vinyl, from Vice Records, is sturdy, simple stuff. Entirely black-and-white, the aesthetic is immediately appealing. Fans of Pettibon's art will undoubtedly devour these and hardcore punk fans should likewise be satisfied by short, sharp - and smart - bursts of music clocking in in single-minute increments. I've never seen any of the EPs on the First Four EPs box available individually and am not certain if they all saw separate release. That said, I wouldn't want them any other way. The box itself is beautiful, housing each jacketed 7" and a nice booklet with Pettibon liner notes, selected lyrics and several photographs. The self-titled 12", with sixteen tracks, contains the same amount of music as the EP set and anyone who has worked to make records will appreciate the cost associated with pressing and packaging four different records as opposed to a single 12". It's really fun as a collector to have this variety of sizes and helps each little EP to stand alone as its own statement (though, admittedly, I always simply play them back-to-back). 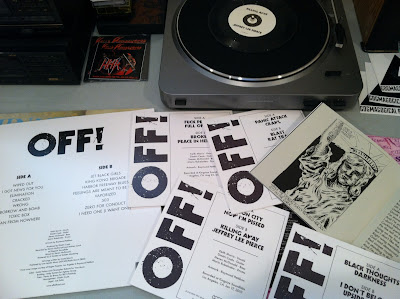 The 12" record comes with a simple two-sided lyric sheet and each of the vinyl incarnations share similar label design with a stylized "O" circling the center hole and the 7" records alternating between inverse combinations of black and white between the A and B sides. The 12" also features "Satan Did Not Appear" etched into the A-side run-off matrix, reprising Pettibon's text from the album's cover art. 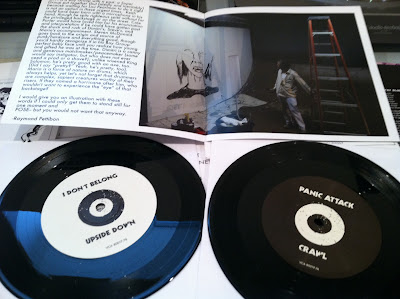 Seemingly basic black-and-white offerings, Off!'s records are rich in detail and high in quality. The vinyl itself is clean, the sound crisp and packaging materials a notch above the standard (and admittedly flimsy) SST fare that sent me here in the first place. Off!'s online store sells First Four EPs for $20 and the self-titled 12" for $15. That's about a buck per song. Add in that you get download cards with both packages and Off! on vinyl is a no-brainer over iTunes. Grab 'em while you still can.
Posted by Gogmagog at 1:54 PM No comments: Links to this post