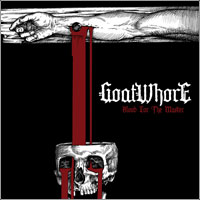 What strikes you right away - quite literally - is Blood for the Master's immediacy. There's no atmospheric instrumental, no crescendoing deathly howl. Just a full-on pummeling right out of the gate. It's a shock to the system, a sprint with no warm-up. With their latest release Goatwhore have found a way to remind this reviewer of how heavy metal is supposed to affect the listener. This isn't sit-back-in-an-overstuffed-chair-and-contemplate-with-a-pipe music. This is wake-up-bound-and-gagged-in-the-trunk-of-an-unfamiliar-car-racing-toward-imminent-evisceration-unless-you-escape-now music. Mount the wings of death, exhort Goatwhore and you had damn well better comply. 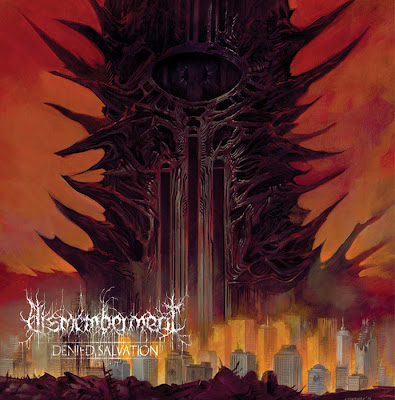 Dismemberment's debut, 2011's The Condemned, somehow exceeded the confines of its EP format. Despite six tracks across a relatively brief running time, the music itself expanded exponentially upon play and has continued to unfold, providing ongoing listening pleasure since it first found its way into my library. I am thrilled, then, to discover that the band's follow-up EP, Denied Salvation, adheres to the same formula and condenses another immense listening experience into 23 minutes split into five tracks.

Read more »
Posted by Gogmagog at 5:50 PM No comments: Links to this post

"Creature from the Black Forest:" Kingsblood post preview track from their upcoming EP

Today is a goddamn wealth of Buckeye metal happenings. Kingsblood just shared a track from their upcoming EP (release show with Skeletonwitch and Dismemberment scheduled for April 15).

Bask in all its metallic glory here and be sure to follow the band's Facebook page for all the latest. 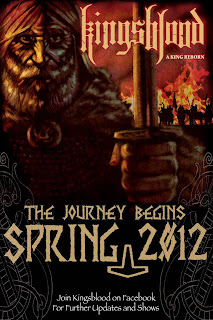 Posted by Gogmagog at 7:34 PM No comments: Links to this post

Kingsblood EP release show slated for April 15. Oh, yeah...Skeletonwitch and Dismemberment will be there, too. Ohio may damn well burst into flames. 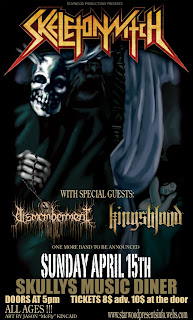 Another day, another EP release show... if only every week were this glorious. Skeletonwitch confirmed today that they'll be performing in Columbus on April 15 at Skully's Music Diner (yep, that's the day after Death on the Vine). Icing on the cake? Dismemberment and Kingsblood are opening. Icing on the fucking icing? It's doubling as a Kingsblood EP release show. If you haven't yet experienced their full-on Nordic soul-ravaging, make this a priority. Just bought my own ticket (go here) and am gearing up for a kick-ass weekend come mid-April. Check out the equally kick-ass artwork brewed up by Kingsblood's own guitar slinger, Jason "McFly" Kincaid.
Posted by Gogmagog at 5:58 PM No comments: Links to this post 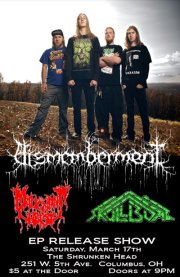 Blackened thrashers Dismemberment are all systems go for their new EP, Denied Salvation. With teaser track "Perpetual Malice" out for free download (complete with killer exclusive artwork by Tony Karnes), the band have now scheduled a full artwork reveal for the EP for Saturday, February 25. Additionally, the band will celebrate the EP's release with a headlining show at The Shrunken Head in Columbus, Ohio on Saturday, March 17. Malignant Christ and Skullbomb will also appear - all for only five bucks! Dismemberment have promised to play both The Condemned and Denied Salvation in their entirety at this show. Watch the band's Facebook page for that new Andrei Bouzikov artwork and more.

The tracklist for Denied Salvation, revealed on Valentine's Day, is as follows: 1. Last Rites; 2. Perpetual Malice; 3. Reap What You Sow; 4.Gateways to the Past; 5.System to Rise

Posted by Gogmagog at 6:52 PM No comments: Links to this post Everyone knows Uriah Heep. That is to say, everyone knows "Easy Livin'." From that point you can narrow it down. Damn near everybody knows "Stealin'." Anyone who's left after that point is more or less a diehard fan. With a massive catalogue, lineups that rotated over two dozen musicians through its ranks across four decades and one or two tracks that continued to receive mainstream airplay after the 1970s, Heep can be a formidable beast for the curious music fan. It's worth the effort, though. For fans of classic heavy metal and progressive rock, the works of Uriah Heep are a veritable treasure trove. And what's more, the band remains incredibly active through present day, having released two new - and very good - albums across the last four years.

The easiest way for me to divide Uriah Heep's output is by vocalist and I'll do so chronologically. That said, the one consistent cog in the evolving Heep machine has been guitarist extraordinaire, Mick Box. A man whose accomplishments on the guitar cannot be overstated, I do not think it is hyperbole to say he easily belongs on the same pedestal occupied by icons such as Jimmy Page and Tony Iommi. It is Mick Box's sound, perseverance and unwavering vision that can be credited with one of the most incredible discographies in classic rock:

Read more »
Posted by Gogmagog at 2:33 PM No comments: Links to this post

It is rare anymore for me to feel downright giddy about anything. Until this morning. At 10:00 AM I forked over $25 (plus another $10+ in "Convenience Charges") for my ticket to an insane line-up coming right here to Cincinnati April 14th at Bogart's (home of my first baptism by metal). Cannibal Corpse is headlining an incredible roster of bands, including The Black Dahlia Murder, Nile, Exhumed (finally, I shall right past wrongs!), Skeletonwitch (Fuck. Yes.), Abysmal Dawn, Hour of Penance and Arkaik. I absolutely cannot wait for this. Go here for more and to buy tickets.

Posted by Gogmagog at 5:42 PM 2 comments: Links to this post 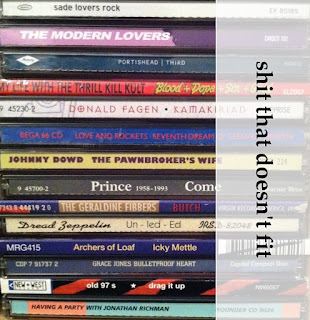 Trying something not too new for this one. I've thrown in the random Prince review here and there but am too distracted from the rest of my shelves to keep avoiding those CDs that don't fall into the hard rock and metal categories that this blog has leaned toward for most of its existence. I don't know how often I'll try this type of post as it's bound to alienate the approximately half-dozen readers I draw but feel like someone has to write about two-decades old Bowie debacles and similar ilk.

So, to start the healing, I'm going to jump right in with the record that damn near devastated my faith in one of rock and roll's icons. In 1993 I was in college and carting around a crate of relatively fresh Rykodisc reissues of the classic David Bowie catalogue that I had cobbled together one at a time over the previous year or two. For those who may not recall (or who were never interested in the first place), CDs were dominant at the time yet still fairly new and Rykodisc was the first label to tackle David Bowie's work in the format and had done an exceptional job with everything from Space Oddity through Scary Monsters, showcasing phenomenal artwork, remastered sound and bonus tracks. Bowie had been playing rock band with Tin Machine since '91 and those records combined with his heavy history made this young music fan very, very happy. I bought these albums one at a time as meager paychecks came in and pretty well immersed myself in Bowie. Once in college, disposable cash was harder to come by and when the first new post-Tin Machine record hit the shelves I had to scrape together whatever I could to get it. This was pre-internet, pre-sampling and, magazine-less, I had no preconceived notions of the contents of Black Tie White Noise.

I was pleased last week to, for the first time in a long time, stop in an honest-to-goodness music store and buy a new Metallica recording that I was actually interested in hearing. A late 2011 digital release that saw a physical CD release on January 31, 2012, Beyond Magnetic is really not new - nor is it in any way surprising. Comprised of four fan-oriented leftovers from Death Magnetic, Beyond Magnetic sounds like exactly that - similar sounding tracks that don't quite measure up to what actually made the record. While fans undoubtedly always hope for some hidden gem among such material, there's really none to be found here. In fact, all four tracks are kind of clunky, all overlong (all spanning seven to eight minutes each, keeping in line with much of the Death Magnetic material) and all feeling more like the studio workout sessions they are than finished B-side fodder.

"Hate Train" provides generic, albeit distinctly Metallica-ized, riffing as well as some admittedly excellent soloing from Kirk Hammett. Aside from that, there are just too many predictable tempo changes and straight up blah lyrical content to hold a listener's interest. "Just a Bullet Away" and "Hell and Back" follow the exact same template. "Rebel of Babylon" recalls pre-Black Album-era thrashage and is the one track I can see myself adding to the regular Metallica rotation (though, really, the lyric is so inane - is James asking for stigmata to kill him - and, if so, how? - or is he just asking to be killed and then crying out "Stigmata?").

On the upside, Hetfield is in fine form, vocally, and both he and Hammett's guitars dominate this EP. Ulrich's drumming is not his strongest and you have to make an effort to even hear Trujillo's bass. All in all, though, Beyond Magnetic is well worth five bucks for the curious in that it shows Metallica are excellent editors and works, somewhat, to remove the taste of Lulu from our mouths. If nothing else, Beyond Magnetic reminds me how much I actually enjoyed Death Magnetic and, as long as Lou Reed is not involved, has me kind of hankering for whatever Metallica may be cooking up next.

Posted by Gogmagog at 4:18 PM No comments: Links to this post

Kick in the Eye: A Buyer's Guide for Bauhaus and Beyond It is difficult, as a music fan buying records for thirty years, to imagine anyone out there who hasn't, at some point, explored the music of Bauhaus. Even if you're not a fan of the genre, the godfathers of gothic rock offer something for any fan of rock and roll and should be considered required listening for absolutely everyone interested in exploring the darker side of rock and new wave across the 80s. Bauhaus, their solo explorations and successful spin-offs all offer excellent, timeless listening and, in my opinion, 16 albums essential to any serious record collection. So, for the unwashed or heretofore unwilling, here are the finest of all their dark entries.

Read more »
Posted by Gogmagog at 12:20 PM No comments: Links to this post 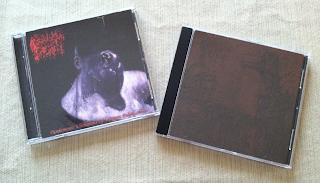 Wow. Having been absolutely floored by my first experience with Prosanctus Inferi at a live show last week, I immediately ordered the band's available CD releases, the full-length Pandemonic Ululations of Vesperic Palpitations album and the Red Streams of Flesh EP, as soon as I got home from the show. Thanks to the wonders of the internet both were in my hands by Tuesday and have been in heavy rotation ever since. Prosanctus Inferi are totally brand-new to me, Jacob Shively of Dismemberment's mention of the band and the Pandemonic... LP in a recent interview with gogmagogical being the first time I had heard of their music. And now, having seen them live and playing - and replaying - the 45 minutes of music available to me, I am fully hooked.