Across the last month I have discovered - and devoured - Devil. Their throwback bluesy doom is easily digested alongside Sabbath and St. Vitus and their vinyl, from Soulseller Records, is nothing short of fantastic. 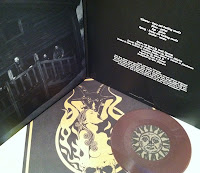 My first acquisitions were spur-of-the-moment record shop grabs of the 2010 demo 10", Magister Mundi Xum, and their latest LP, 2013's Gather the Sinners. Magister..., in its second printing, is one of 500 copies pressed to white vinyl (the original pressing was black) and is housed in a heavy white jacket with my favorite of the band's artwork. A slick insert collects band photos and the basics in terms of information on the recordings. It's an incredibly raw EP and the 10" format contains exactly enough to get a new fan salivating for more. Gather the Sinners, the band's second full-length, is listed as a "limited" vinyl edition and, indeed, the band's own official webstore appears to have sold out. It's not clear to me exactly how many were produced but the gatefold package and platter are as heavy to hold as they are to hear, no frills but no disappointment in any way, either. 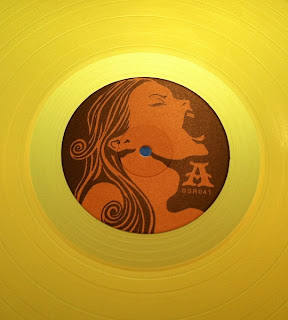 I had to utilize mailorder to round out the collection with the band's 2011 7" single, "The Noble Savage/Blood is Boiling." This record also came my way in its second pressing, a deep chocolate vinyl from a series of 500, the first pressing again apparently black though limited to 100. I also imported the band's 2011 full-length debut, Time to Repent, another repress following an initial black run, this time in transparent yellow. One wonders if a colored variant of Gather the Sinners will pop up before too long. Each of the prior offerings complemented their jackets' color schemes and a 12" in maroon would look awfully nice.

Devil's design aesthetic is rock-solid. Each of the packages is beautifully detailed yet retain a Scandanavian simplicity that effectively communicates (and does not overdecorate) the utilitarian rock within. The largely monochrome packages are simultaneously rich and subdued. Center labels alternately complement and copy segments of the jacket art, leaving the entire catalogue feeling like an entirely cohesive whole. Credit must be due to Soulseller as well as the materials, from jackets to the platters themselves, are all top-notch. The recordings are clear and strong and play free of any noticeable defects. None of the albums feels in any way flimsy, which is a good thing as I have been pulling these records off of the shelf every few days and don't see myself stopping anytime soon.