With the 2011 release schedule drying out as we head toward the Christmas holiday, I feel pretty safe compiling the compulsory Top Ten for the year. Going through the shelves, re-reading old reviews and, above all, re-listening, it was tough to narrow down to ten - which is a nice blessing for a time in which the music industry is over-reported as less than healthy. There's still plenty good to be had out there, some mass-produced and marketed by huge labels and some handed off for a five-dollar bill at a live show from a band member working a card table before and after they take the stage. So, without any further ado, the best ten records to enter my library since January first:
10. Gloom - Job for a Cowboy (Metal Blade Records) An EP so fantastic, I bought it twice. This little record crystallized my on-the-fence opinion of this band and when their 2012 full-length hits the shelves, Job for a Cowboy will be on my release-day-must-have list. Read my original review of Gloom here.

"Easily one of the best metal records of 2011" I concluded in my August review and I still stand by my original description: dumbfuckingfoundingly good.

Still playing this one as recently as yesterday, Unto the Locust remains a refreshingly simple reminder of why I fell in love with Machine Head way back when (Burn My Eyes) and again (Through the Ashes of Empires) and again (The Blackening). Read my original review here.

Amon Amarth's latest preceded the creation of this blog but was a semi-permanent resident in my stereo from its release. These guys have yet to disappoint and Surtur Rising was no exception. There's a formula here with mass appeal that still doesn't tire or come across as hackneyed or insincere.
6. Into the Wild - Uriah Heep (Frontiers Records)

This entry from 2011's first half still resonates and often still finds its way into rotation with Heep's established classics. It doesn't hurt that I was able to catch Uriah Heep at one of the best shows I saw all year in support of the record, either. Read my original review here.
5. Worship Music - Anthrax (Megaforce Records) Anthrax's own Chinese Democracy was easily teed up for failure on multiple levels. Personnel changes, including the frontman, re-working and re-recording across years (and coming nearly eight years after the band's previous studio record) all pointed toward what had to be a gamble at best, disaster at worst. What we got was one hell of a great record.
4. Rock & Roll Submarine - Urge Overkill (UO Records) 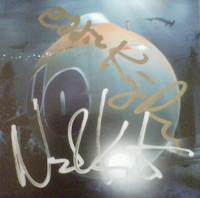 If eight years seemed like a long gap between Anthrax records, try sixteen on for size. It is easily conceivable that kids born after Exit the Dragon could encounter Rock & Roll Submarine on the stereo in their first car as their introduction to Urge Overkill, a band all but forgotten by the mainstream music world. While it may still not have made the radar (or sonar?) on radio, it's at once a fantastic comeback and a compelling continuation of the Urge Overkill story. Read my original review here. 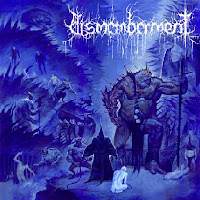 I have been raving about Dismemberment a lot as of late and rightly so. A week has not gone by since I first encountered The Condemned online that it hasn't received play and, since grabbing the CD at a recent incredible show by the band, it literally has not left the stack of albums that move from my car to desk to stereo and back again. To be perfectly honest, it is almost a toss-up between any of my top three and, on any given day of the week, The Condemned could be Number One.
2. Time is Up - Havok (Candlelight Records) 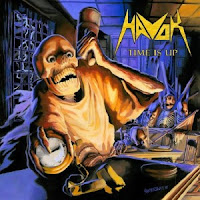 Time is Up was an early encounter in this blog and, like other top entries in this list, has been a near constant in my daily listening rotation. I was lucky enough to catch the band live very recently and am happy to report that their energy live outshines even that on this excellent, excellent record.
1. Kill on Command - Jungle Rot (Victory Records) 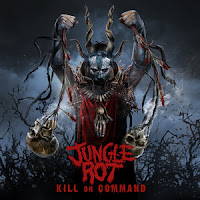 What can I say? Is anyone who reads this blog surprised? I made this list as objectively as possible (which is impossible given that it simply reflects my personal preferences). I grabbed every 2011 release I have, started with one, took another and either stacked it above or below based on my comparison of the two. I continued this process until I had run out of albums and, lo and behold, Kill on Command came out on top. And why not? Jungle Rot are singlehandedly responsible for reigniting my passion for metal this year and every encounter with them - whether live, via interview or on this new record - has been nothing short of fan-fucking-tastic. Jungle Rot is rock-and-roll and, in 2011, Jungle Rot is the best of rock-and-roll.
Posted by Gogmagog at 2:34 PM