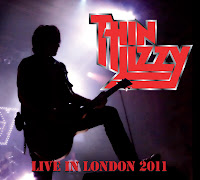 Prior to a very skeptically-approached Thin Lizzy show a few weeks back, I would have never considered giving Live in London 2011 a chance. After being blown away by the raging remnants of the almighty band, though, I quickly placed an order for this double-album, hoping that this lightning was indeed captured in a bottle from an outing that featured the always-excellent Vivian Campbell to boot. So, how was it? The quick version: ...ergh. The long version: just keep reading.
Maybe it was just the energy at the show, all these old favorites suddenly vibrant and alive in my face, that sold it for me. I can almost definitely say it was Scott Gorham in the flesh. That and his interplay with Damon Johnson. Whatever it was, Live in London 2011 doesn't recreate the experience. Ricky Warwick is in the unenviable position of trying to fill in for the irreplaceable. And while he certainly tries hard one feels he tries too hard. When delivering the slower-tempo, more emotive Lynott lines Warwick sounds very much like an impressionist, not a vocalist, and it feels as though we're not hearing his voice but instead his version of Phil. Marco Mendoza deftly handles the bass end of the deal and in the live setting he provided a lot of the visual excitement and appeal that Warwick was lacking. On record, however, those vocals are all alone and, man, they're just not very good.

But guitars are what really matter here, right? So why, then, do they sound so uninspired and by-the-numbers? Across a generous twenty tracks, many of the the requisite big hits, the majority feel like a tribute band playing it safe. Neither Gorham nor Campbell take any chances and, while I could never dream of ably playing these Lizzy tunes, I've heard cover bands handle the hits just as well. A few later-era numbers, particularly a couple from Renegade, actually come across pretty successfully. And fewer still, specifically "Emerald" and "Black Rose," absolutely shine (one must wonder if this Gorham-era lineup doesn't find more success in a distilled opener's set like that on the Epitaph tour). I know I am supposed to bow at the altar of the lifer, Brian Downey, and while I certainly do not hold him in low regard, Lizzy drums were always the aspect of the band to which I paid the least attention. Even highlighted by his showcase, "Sha La La La," I cannot say time has done anything to change my opinions of Thin Lizzy percussion.


Finally, production - or lack thereof - on Live in London 2011 blows. Now, if the album succeeded I would hypocritically say it was "raw" and praise it as such - but you cannot have a great live record without a great live performance and some clean-up and editing would be welcome here. Being instead a ho-hum show from a single date (January 23rd), this "instant recording" (indeed announced on record as available immediately after the show) sounds like one, i.e., a pretty good bootleg. Granted, the notoriously tinkered Live & Dangerous would not be a fair comparison by any means but I did pull out the supposedly unaltered Still Dangerous as a reference for that undefinable energy. Still Dangerous wins, hands down. It sounds sloppy. Phil flubs lines. And it's glorious. Not a classic record by any means but, based on what I hear, it sounds like a show I would have wanted to attend. There's a slinky magic that, despite everyone's best efforts, eludes a Lynott-less Lizzy. They can get close, I witnessed that much, but Live in London 2011 is nowhere near.
Posted by Gogmagog at 7:53 PM