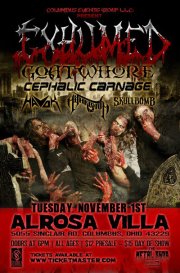 First things first: I missed Exhumed. I hadn't planned to. A text from home close to eleven o'clock let me know one of my children was ill and sent me packing early. Parental responsibility vs. metal...it was a tough call but the right one. My wife's willingness to care for the kids solo on any given weeknight while I drive ninety minutes away for a metal show is one perk I do not want to endanger.
So, no Exhumed for me but, goddammit, what a hell of a show the rest of the bill was. This was my second trip to the Alrosa Villa and I am hooked. Good folks on staff, great crowd, "regulars" I already recognize and, I must point out, some of the most simultaneously loud and clear amplification I have ever experienced in a small venue. The volume, skull-splitting, never gave way to distortion of any sort and much appreciation is reserved for the folks who make that happen.
Since I've done this twice, it's now a ritual. Monster beer followed by merch browsing and the top-billed acts delivered here, bigtime. Havok had a multitude of great shirts from which to choose bested only by the insane, extreme wares peddled by Goatwhore (who, judging by the crowd's dress, were historically heavily favored in terms of outfitting). Exhumed had a nice display as well and I had no problem whatsoever dropping forty-two bucks for three shirts (about what I imagine one will run me at next week's Priest show).
Havok was initially the main draw for me for this date but the inclusion of Kingsblood (due, perhaps, to the untimely demise/withdrawal of Cephalic Carnage?) on the bill is what made up my mind to drive out eighty miles on a mid-week work night to see this show. Kingsblood opened first, again to the strains of Basil Poledouris' Conan theme, and, again, they fucking brought it. A couple minor issues with monitors and a mic cord affected the set early on but Kingsblood took it in stride and gave the crowd 33% more intense barbarian rockage than the last outing I witnessed with four numbers in total. I've delved into a bit of "Viking metal" and the like over the last couple years and the following differentiate Kingsblood from the bulk of the pack for me:
﻿ 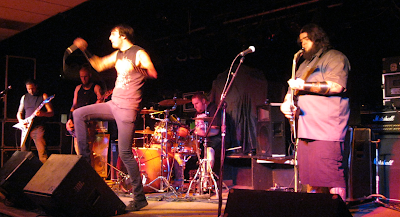 ﻿
It is obvious Kingsblood are re-establishing themselves locally and I will be thrilled if this little blog drives some attention their way.
Here's hoping these guys get the audience they deserve to make all this and more a reality.

Skullbomb and Mithridium (formerly known locally as Black Rue) followed and both were admirably aggressive, accomplished and focused acts though neither was quite up my alley. Plus, I was ready for some Havok. 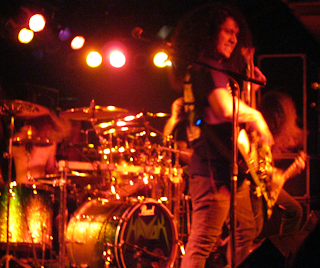 And Havok satisfied. In spades. These guys, young as they are, really have it together. They've got a great look without appearing in any way staged. Stage presence, for that matter, is spot-on perfect. They're active, involved and appear genuinely excited by the music and the scene. The band one-upped Kingsblood by entering to the Mola Ram chant from Temple of Doom (Mola Ram also figured on one of their sweet t-shirt designs as well). These thrash revivalists could teach a thing or two to some of the originals and I was thrilled as hell that I could not conceive of any possible way they could merge this performance with the spoken word ramblings of Lou Reed. Technically, they're simply awe-inspiring. There was not a single member of the band who was not fun to just watch. David Sanchez and Jesse De Los Santos certainly dominate and really know how to own the crowd. Reece Scruggs looked to be having a hell of a good time himself while the amount of power Pete Webber exuded from such a diminutive frame literally shook my innards. I was also really pleased that the selections split the balance somewhat between the ultra-hot Time is Up and the incredible Burn from '09.

If there was one complaint to be lodged about Havok's set it is simply its brevity. Perhaps time got away from me in the excitement of the show but it seemed as though they spent less time onstage than Mithridium. Seven songs came and went in a flash and I could not help but feel a little shortchanged (as shortchanged as one can be when paying twelve bucks for six bands - which doesn't leave much room, if any, for complaints but I'll still pine for a "Melting the Mountain" performance). I expect, as most everyone else does, that Havok will just become immense and, I am sure, this performance will in time seem like just an appetizer for massive, headlining shows in Havok's future.

Goatwhore live was power personified. Louis R. Falgoust II (can I just call him "Louis?") was the perfect frontman. Intense, imposing, animated and, above all, evil as all hell. I know they opened with the Carving... title track but am not familiar enough with their catalogue to have known from where they drew the rest of the set. Regardless, it was impossible to not be drawn in and fully engaged by their performance. The band remained stoic throughout and Louis lurked around the stage while Sammy Duet provided an insane amount of sound from the band's sole guitar. Like Immolation, Goatwhore defined themselves for me as one of those bands whose recorded work is easily trumped by their live show. And all this said, I still made a promise to myself to check out any other records they may have out there.

I got called away during Goatwhore's closing number and can only hope Exhumed destroyed. They're another band I know only via their most recent record but in the case of All Guts, No Glory I love the record and was really excited to check them out live. I invite any readers who were there for the duration to add their observations and opinions via the Comments feature.

Again, six bands, twelve bucks. Got to love Alrosa Villa and Columbus Events/Park Avenue  - and the bands, of course - for making these shows possible.
Posted by Gogmagog at 7:02 PM