Yeah - a one-off. And for no better reason than I benefited from similar posts and wanted to ensure there was one more entry out there to find. There are already a million and one variations of this out there on Pinterest and beyond and a million of those are probably better than this one but, still.

What sets my board apart, I think, is the gripping surface. I hate velcro on the bottom of pedals. I don't like zip ties. I don't gig and, I bet like 94% of you, never play anywhere outside my own basement. I like to swap pedals out and change order frequently. I found that a "nubby" doormat will allow any pedal with feet (like the Electro-Harmonix I love) to nestle in and remain pretty still throughout play. I don't need anything to stay immobile and don't need to pack or move this board. So - to finalize my supplies I also bought: 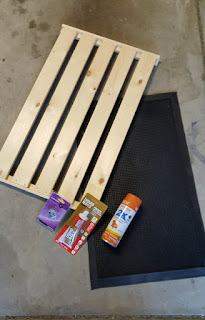 Using a handsaw I already owned, I cut one of the five slats loose. I eyeballed this and cut as flush with the edge of the fourth slat as I could.

This left little "L-shaped" crosspieces attached to the ends of the single slat. I used a smaller handsaw to trim the shorter of these sides flush with the edge of the single slat so that it could nestle together perpendicular to the larger board forming and angled whole.

I then affixed the single slat to the larger board using the L-brackets. Were I to do again I would probably add a third, larger bracket in the center for more stability. This fit together at approximately a 90-degree angle, so the "feet" didn't sit level on the floor. I simply took a straightedge against the floor, scribed a straight line across the bottom of the feet and made another cut along this line to level everything out. I then carried the whole thing to the back yard and applied one coat of spray paint. All that took less than an hour. Let sit overnight. 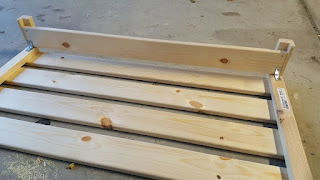 Day Two: I sprayed another coat of paint and let dry for another day. 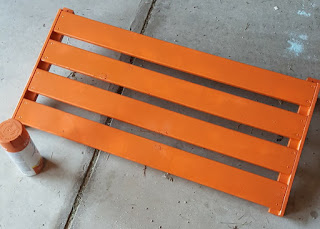 Day Three: I took my door mat and a box cutter with a fresh blade and sliced it into four rectangles that would fit on each of the slats. Preferences for coverage will vary but mine ended up about 28" x 2-1/2", I believe. I then applied the Liquid Nails to the back of the rubber and lay on each of the slats. This stuff is pretty liquid but won't squish out and make a mess. You have maybe 20 minutes with which you can mess with positioning and then, wait one more night. 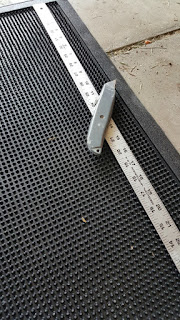 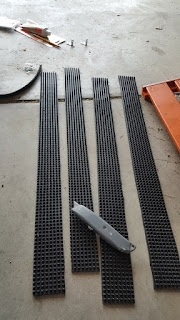 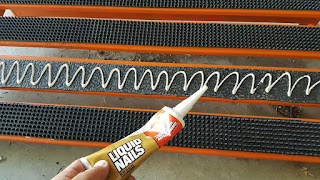 That's it. Simple stuff. You could spend a little more money and a little more time and make additional improvements such as holes for cables or attaching a power strip or source underneath. Or you could just be satisfied because the point is to play. 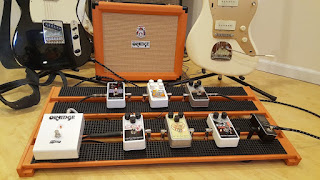 Posted by Gogmagog at 8:22 PM No comments: 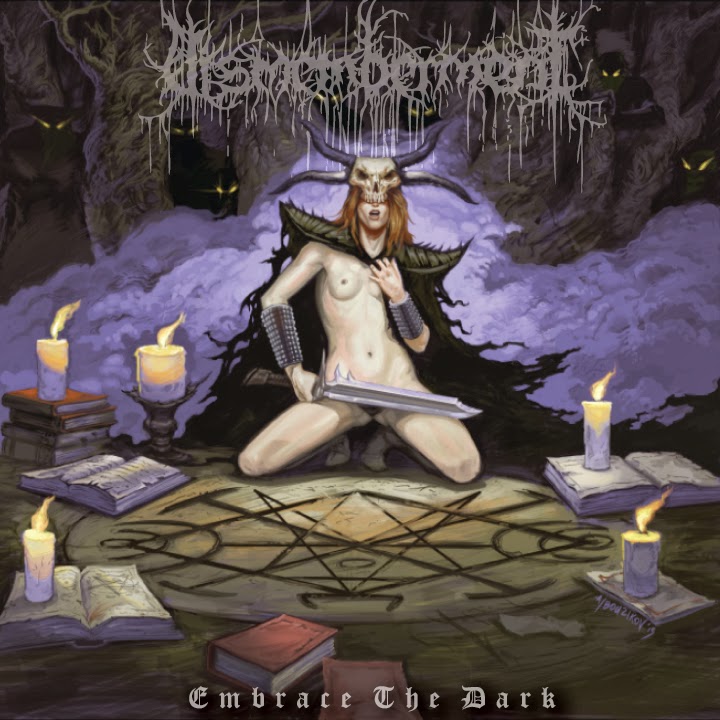 Damn. Has it been nearly two years since Dismemberment unleashed new music? 2012's Denied Salvation (and its predecessor, The Condemned, for that matter) still seems fresh and, in this listener's library, still garners regular play. That said, I've been hungry for a full-length recording ever since first catching the band live in 2011 and, finally, Embrace the Dark is set to arrive early this year.

"Confess Your Flesh" announces an evolution. The thrash is black, to be sure, but Dismemberment immediately slithers onto new ground, shedding the skin of hyphenated subgenre descriptors and spawns a sound that is simply their own. There is no doubt that we'll see Carcass and Death comparisons across the blogosphere and, to me, the most consistent element revealed by Embrace the Dark is not that Dismemberment sound like any of these bands but instead how, like any of these bands, they've established a sound that is utterly and entirely theirs. Their first track rages out of the gates with choppy riffs that flail like a knife wielded in darkness and percussion that, once it finds its target, pauses only to blindly pound the blade into bone (check out the killer transition at 1:21). Vocals have achieved a balance of menace and clarity that deliver threats and promises with immediate understanding. Dismemberment are here. And then they're moving. Try to keep up.

Not only does Embrace the Dark find the band evolving over the course of an album but each track exists as some twisted Darwinian microcosm. The brief lead that cuts through the middle of "Eye of the Keeper" kicks off a devastating domino effect of changes, leaving vocals more or less in the past and ushering in riffs that promptly ascend to the top of the food chain. Those bemoaning a lack of bass presence (and, yes, that's usually me) need look no further than the heavy "Archaic Wisdom" which opens up for some solitary bass licks itself amidst its dry heaves of Old Gods lurching forward from centuries of sleep. "Labyrinth" winds with the hesitation with which one would approach its namesake indicating a maturity and providing a variety often absent from the all-systems-go! that often dominates modern thrashterpieces. Dismemberment remind the listener that the journey outweighs the destination and I daresay the melodies that lead us from the maze - or further within - reveal a strand of Thin Lizzy in this shifting DNA. "Sacrifice Reality" transcends its militant rise from the ocean and finds itself racing toward higher ground on all fours via another scorching Shively lead around the 3:30 mark before finally sauntering, fully upright, to an acoustic outro heretofore unheard in the realm of Dismemberment.

There's depth in devolution, too, with the band shape-shifting with ease on tracks like "Aura of Obscurity," slowing unwinding the double-helix to the base elements of primal predator again nearly two minutes in. The guitar's pulse quickens against leaden riffs in "Anathema" and, once the cymbals kick in, one is ready for anything and receives a track that resurrects the feel of the band's stellar demos that preceded Embrace the Dark. "Monolithic Impurity," then, strikes from out of nowhere with a sound unlike anything Dismemberment have dished up before, its stripped-down, tremeloed riffage conjuring up Cthulhu and his cohorts.

"Born to Consume" wraps up Embrace the Dark with Dismemberment as sonic Übermensch, poised above the planet, gazing upon a species it has surpassed - albeit less benevolently than anything Kubrick or Clarke ever imagined. Dismemberment instead go full circle, a beast shrouded in human trappings and possessed of a progressive intellect bent on a stratagem of savagery homo sapiens has yet to suffer - chaos unfolding, spiraling out, the seed of damnation, a creature born to consume.

Note: As Dismemberment were a vital component of this blog's energy, growth and an inspiration for the record label that stemmed from its contents, it is only fitting that their full-length debut, which I have been wishing for since first hearing the band, will serve as the last review posted here. While my passion for music grows daily, the rest of daily life has changed significantly and time and access to bands, blogs and everything required to stay relevant has dwindled. The label itself will likely wind down shortly and, as I turn off the lights one by one, it is with immense respect and gratitude to Dismemberment, whose members personify everything that is good about music, especially metal: intelligence, wit, generosity, a tireless work ethic and the astounding capacity for perpetual growth in their craft and soundscape. These guys are the real deal. In my book there are none better. Thank you to Jacob, Luke, Taylor and J.D. - your music has changed my life for the better.
Posted by Gogmagog at 12:19 PM 3 comments:

I went and posted this year's Ten Best-Of on the excellent analog-worship blog, Summoning Spirits. Read up on my top five times two here.
Posted by Gogmagog at 3:56 PM No comments:

A recent weekend trip for a family wedding found me in the Blue Ridge Mountain community of Lynchburg, Virginia and, with a Saturday afternoon to kill, I fired up the Vinyl District app on my phone and, lo and behold, found an independent record store, Speakertree Records, a few hundred yards away from my hotel. 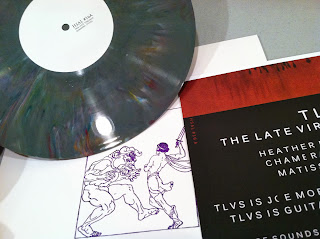 Speakertree's wares were devoid of my usual metal desires but they had a healthy stock of indie label vinyl and I was immediately drawn to a trio of 10" records unified by a simple single-colored print stamped onto their jackets. Without bothering to look up the artists or ask about the contents within, I snatched up all three, took 'em home and only later dug into what I was hearing.

Turns out the label, Harding Street Assembly Lab, was also local to Lynchburg and their last blog post, from 2012, indicates that they owned the record store, too. The contents of the records are six sides of moody, largely instrumental, collegiate art and noise rock, not something I would generally actively seek out. That said, I like the project's approach: a label act on the A-side with a friend of the label occupying the B-side. I imagine this is a win-win strategy in terms of financing and, of course, exposure and applaud the ingenuity here. 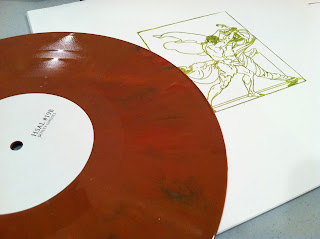 The presentation of each of the records is pretty fantastic. The aesthetic is simple and generally well-executed. The prints, pulling from Greek mythology, are fine and clean and the records' center labels are minimal with only the catalogue numbers and artist names presented on a stark white label. The label's own logo occupies the reverse of the glossy white jacket and each album also includes a two-sided full-color insert on heavy stock with varying amounts of specific track, session and artist information. 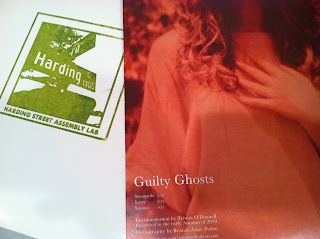 The vinyl itself is heavy and clean and the multicolor blends are generally well-matched to the colors of the prints on the jackets. HSAL16 is a predominantly slate-colored slab with enough purple highlights to complement the Minotaur and Theseus on the front. HSAL 19 is laregly a deep pumpkin hue with streaking traces of green similar to what I am guessing is Heracles and Thanatos in combat on the cover. Here the vinyl itself, poorly described as "burgundy" on the label's blog, really matches nicely with the Guilty Ghosts' side of the insert. Finally, HSAL17 provides my favorite of the records, visually, with a rich brown blend that matches precisely with Hercules and the Hydra on the jacket. 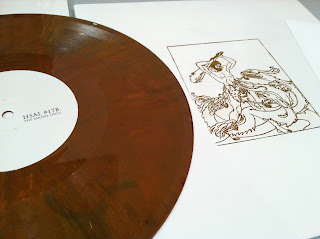 All in all, the Harding Street Assembly Lab 10" trio is a find I love. The handmade work is both a blessing and a curse, though, as I love the effort that goes into these but find myself a little disappointed with some sloppiness here and there (HSAL17 has an off-center, incomplete print with some smudges above that indicate errant ink was wiped away - I would have saved this record out as a second at a reduced price). Still, said sloppiness also adds to the charm and unique aspect of releases such as these. While it's likely not a label I will return to as the music within just isn't my thing, it's the perfect souvenir from a long weekend and the best way I can think of the leave a little money in the local economy and arts scene.

HSAL16 and HSAL19 still appear on the label's Bandcamp site as available for purchase on vinyl at $12.00 each with HSAL17 listed as sold out. All were produced as pressings of 100 each. 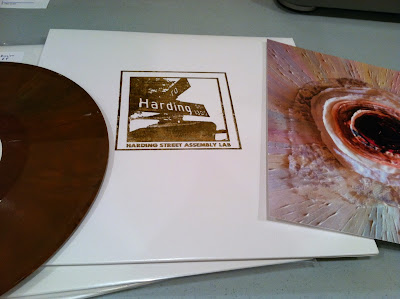 Posted by Gogmagog at 4:23 PM No comments: